Happy Monday! It’s not really but this post might put a smile on your face and quite possibly make you hungry.

Today is all about last Thursday, when I got to try the meze at the Real Greek in Southampton followed by attending the premiere of The Little Mermaid by the Northern ballet at the Mayflower.

So, last Thursday my manager Suzanne, Donna, our boss Dave and I, after flipping a coin to decide where to go for dinner before the theatre, we ended up at the Real Greek. I’ve heard about it but I haven’t been before.

My review might differ to others but as a Greek-Cypriot who has had Greek and Cypriot food for years and whose father and sister are cooks, I had higher expectations than normal.

From the outside it looks lovely, I personally enjoyed the Greek greetings and signs as it reminded me of home but I heavily disliked the music. Greek pop music, and not the best  Greek pop played in the background. Initially I thought it might be just me who didn’t like it because I was familiar with the songs and that’s not the type of Greek music I’d expect at a Greek restaurant but the others agreed with me.

We decided to go for a Greek salad and the ‘Athenian’ meze. It included classic Greek starters such as flatbread, tzatziki and hummus, which were tasty but for me they lacked character. I expected the tzatziki especially to have a stronger garlic flavour.

We also had meat ‘pies’ and cheese ‘pies’, nothing like British pies, but fried or oven baked filo/puff pastry parcels/dumplings filled with meat or cheese (we usually have them as a snack or breakfast in Cyprus). I loved the cheese ones but the meat ones needed a bit more filling as most of it was pastry.

Their chicken and halloumi & vegetable skewers were delicious, probably my favourite out of the rest of the food included in the meze, although halloumi is not really ‘Athenian’.

We also had lamb meatballs, dolmades, lamb kefte and ‘loukaniko'(beef and pork sausage). The lamb kefte and the sausages were delicious, but I was a bit disappointed with the meatballs and the dolmades, not because they tasted bad but I expected traditional casserole dishes like these to be oozing with flavour and aroma from all the spices, but they didn’t, not as much as I thought they would. 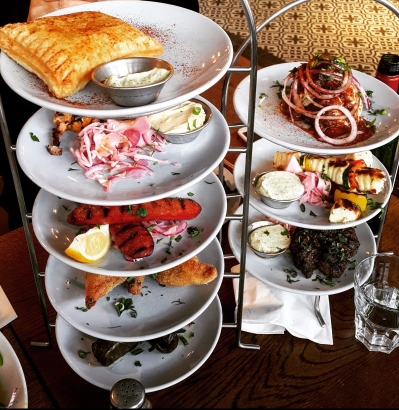 After all the food, we were pretty stuffed and sleepy, so I couldn’t squeeze in a pudding, although I’d have loved to but opted for Greek coffee metrio (medium- not in size but with a teaspoon of sugar). It was OK but it needed an extra minute on the hob, I shouldn’t have been able to feel some of the grain coffee in my mouth from the first sip, that’s usually just at the bottom.

All in all the food was good. Everything was perfectly cooked, presented beautifully and tasted nice. But for me it just lacked the homeliness and personal touch and there was not enough variety or quantity. The dishes that tasted the best were the not pre-prepared ones, the salad, the skewers and the sausages. I guess that is to be expected in large chain restaurants, although is not always the case the best food I had back home and in the UK it has been from small local, independent restaurants.

If you want to try it, it will not disappoint, but if you want real Greek meze, go to Blue Island instead. The owner and chef Sotiris/Simon is Cypriot and he has been cooking his whole life. I have tried their meze and is delicious!

After our meal we made our way to the Mayflower. The sky was gorgeous, red and cloudy including people dining whilst hang from a crane. Have you seen it? It’s been heavily publicised on social media all week and I wanted to try it because I’m terrified of heights and I’d like to challenge myself but I wouldn’t pay that much. I think I’d be too scared to eat anyway but the views might have been worth it.

When we finally made it to the Mayflower I was pleasantly surprised to find out that some of my favourite colleagues and friends, Mark, Jaba and Jamie also got tickets for the ballet and our seats were actually close to each other!

It was the first time I’ve ever been to a ballet show so I didn’t know what to expect but oh my. We had a little chuckle when the fish and jellyfish on a stick props came out but the whole production was just amazing. The orchestra was incredible, I absolutely loved the music, the dancing was elegant, playful, almost ethereal at times and their costumes were beautiful, showing off their amazing dancing skills.

Well done to Northern Ballet and everyone involved in the production and thank you to Solent Staff scene for the discount tickets.

It was a great night with lovely friends and good food.

This site uses Akismet to reduce spam. Learn how your comment data is processed.

Join 1,339 other subscribers
Follow Lessons I learned after I turned 30 on WordPress.com